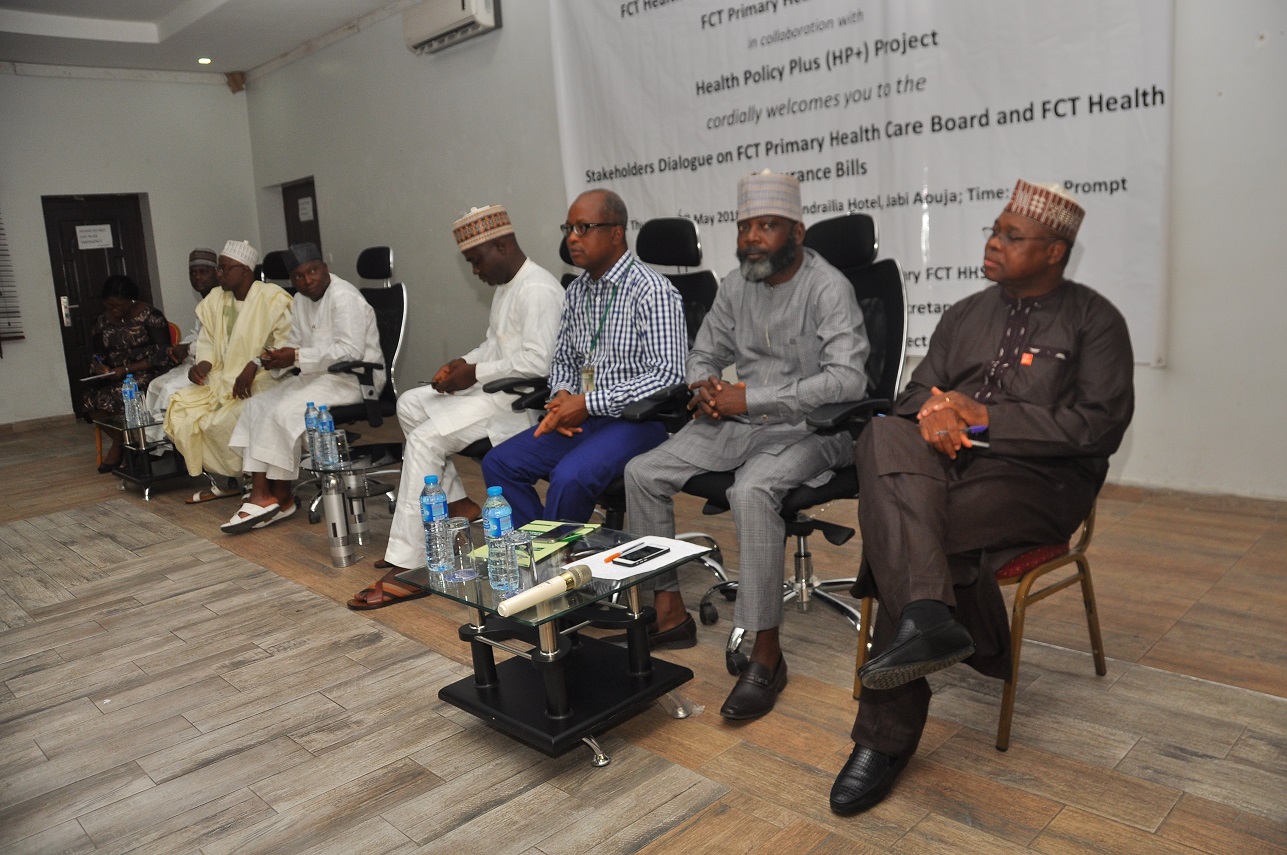 Many residents of the Federal Capital Territory, Abuja, Nigeria are worried, and they have every reason to be uncomfortable. Healthcare facilities at the Primary level are dilapidated. Half of the 237 Primary Healthcare facilities in the FCT are in sorry state. Besides the challenges of logistics, more than 3000 health workers are needed to effectively run the health facilities.

It is therefore not surprising that FCT stakeholders met on Wednesday, May, 16, 2018 to take their destiny in their hands through a robust dialogue on FCT Primary Healthcare and Health Insurance Bills. It is not that FCT does not have Primary Healthcare Board and Health Insurance Scheme, they do, but they have been operating for about ten years without the required legislation which has impacted negatively on its ability to improve access to quality and affordable healthcare for residents of FCT in line with Universal Health Coverage objectives.

Because of its status of the capital of Nigeria, Abuja’s population keeps increasing thereby putting more pressure on the city’s healthcare facilities especially at the Primary level. FCT is also in dilemma because without appropriate legislation in place for both agencies, it will not benefit from the one percent of Consolidated Revenue Fund termed Basic Health Care Provision Fund (BHCPF). The fund is able to provide over N 1 Billion additional resources to fund primary Healthcare and Health Insurance for the residents of FCT in 2018 alone among other funding options.

The dialogue which was put together by the FCT Health and Haman Services Secretariat and FCT Primary Health Care Board in collaboration with Health Policy Plus Project was attended by close to 100 stakeholders from the National Assembly, NHIS, NPHCDA, FCT HHSS, FCT PHCDB, the six Area Councils, AC Service Commission, FCT Health Financing TWG, Traditional Rulers, Media and Development partners among others.

Speaking during the dialogue, a member of the House of Representatives, Hon. Zephiniah  Jisalo said it was the  beginning of the process to get the Bills presented at the National Assembly.

According to him,” after the stakeholders meeting, the Bills will go for First Reading, Second Reading, and then it will be referred to a committee for Public Hearing. That is when the Federal Capital Territory, will be invited. We shall contribute to the success of the Bills.  I can assure you, as soon as this stakeholders meeting is completed, it will be presented at the National Assembly and it will take the normal legislative process.

Shedding more light on the Bills, the Country Director, Health Policy Plus, Nigeria, Onoriode Ezire said the Bills are important because without them being passed, FCT cannot access the Basic Healthcare Provision Fund stressing that the dialogue was the beginning of a process to make the Bills see the light of the day at the National Assembly.

Ezire noted that the Bills cannot scale smoothly if it doesn’t have the support of the Area Council Chairmen and Area Council Secretaries adding that that is why they were present at the dialogue. In his words: We are all here with them and other stakeholders so that they can give it all the needed support.”

On his part, the Chairman of Bwari Area Council, Musa Dikko said the Area Councils are committed to the success of the Bills stressing that if the Bills scale through and passed into law, it would be to the benefit of all the residents of the Federal Capital Territory.

According to Dikko,, ‘‘we are happy that these Bills are coming on board because the Primary Healthcare  Centers are in the area councils. This dialogue is a wonderful process. Beyond the dialogue, we are going to ensure we lobby our brothers and sisters at the National Assembly so that the Bills can be passed into law speedily. You know that  activities of  health in the FCT have not been backed up by an Act, certainly after this dialogue and the Bills are properly sponsored and passed  into law, we shall now have an Act surrounding and backing up of healthcare activities in FCT”

The Senior Legislative Aide to Senator Philip Tanimu Aduda, Ali Dankawu  who stood in for his principal said Aduda was committed to the speedy passage of the Bills because it affect all residents of the FCT who he represents at the National Assembly. According to him, the dialogue is significant because it has to do with Bills that have direct impact on the people. Aduda promised to work hard to ensure the quick passage of the Bills and signing into Law by the President.

On his part, the Acting Executive Secretary, FCT PHCDB, Dr Mathew Ashikeni said the dialogue wouldn’t have come at a better time. Ashikeni explained that for Primary Healthcare to function well, it has to be put in proper perspective and under one roof.

He said ‘” We are working together with the Area Councils, we are going to partner to make sure that quality healthcare is delivered to the people of FCT.

‘’All other states in the federation have passed their laws establishing the Primary Healthcare Development Boards or Agencies as the case may be, but in the FCT, we have not done that. Since 2015 we have been in the process trying to get this law enacted and we are very glad that now more than ever before, there is so much consensus, so much efforts and agreement among all the stakeholders to ensure that we have a law that will back the implementation of Primary Healthcare, and then position FCT in a way that it can access all the benefits attributable to all the states of the federation”

The Royal fathers at the dialogue also expressed their readiness to push for the quick passage of the Bills. Speaking on behalf of his colleagues, the Emir of Jiwa, Dr. Idiris Musa MFR commended Health Policy Plus, Nigeria for its efforts at ensuring that the Bills get to the National Assembly for consideration.

The Emir who observed that majority of the people who live in FCT are  non-indigenes said it would be in the interest of all Nigerians to get the get the Bills passed into Law.

Dr. Musa called on the Chairmen of the six Area Councils and other stakeholders to ensure that the Bills get speedy attention.

The dialogue has come and gone, but considering the poor state of health facilities at the Primary level in the FCT and the logistics of getting functional health facilities in place for the wellbeing of all residents of the capital city, it is only wise that all stakeholders and indeed Nigerians in general support the passage and implementation of the Bills. After all, FCT is the pride of all Nigerians no matter their state of origin.