Operatives of the Directorate of Operation and General Investigation of the National Drug Law Enforcement Agency (NDLEA)  attached to courier firms have intercepted 11.36kg heroin and cannabis packaged for UAE, Netherlands and Omar. The drugs were concealed in dictionary, fancy light and body cream

Besides, a freight agent, Miss Njoko Elizabeth, 37, has been arrested for attempting to export 250grams of Tramadol and cannabis to Dubai through the NAHCO export shed.

The drug exhibits were concealed inside some gallons of palm oil and honey, which were packed among food items and hair attachment.

In a related development, an Italy-bound passenger, Oziengbe Ehighalua Andrew, 55, was arrested with 600grams of Tramadol 200mg while attempting to board Royal Air Maroc flight to Italy, via Casablanca.

Also, seven cartons of khat leaf with a total weight of 295kg have been seized at the NAHCO import shed of the Lagos airport. The consignment came into Nigeria from Tanzania through Cairo on Egypt Air

According to Director, Media & Advocacy of NDLEA, Femi Babafemi, over 2.3million tablets of illicit pharmaceutical opioids and other psychoactive substances meant for distribution in seven Northern states of Borno, Kano, Kaduna, Sokoto, Zamfara, Gombe and Nasarawa were also intercepted by operatives of NDLEA in series of interdiction operations in the past week.

In his words “In all, a total of 2, 325, 553 tablets and capsules of Tramadol, Pregabalin, Hypnox, Diazepam and Exol-5 including 7, 353 bottles of a new psychoactive substance locally called Akuskura meant for the seven states were seized from locations across Kaduna, Kogi, Sokoto, and the FCT. 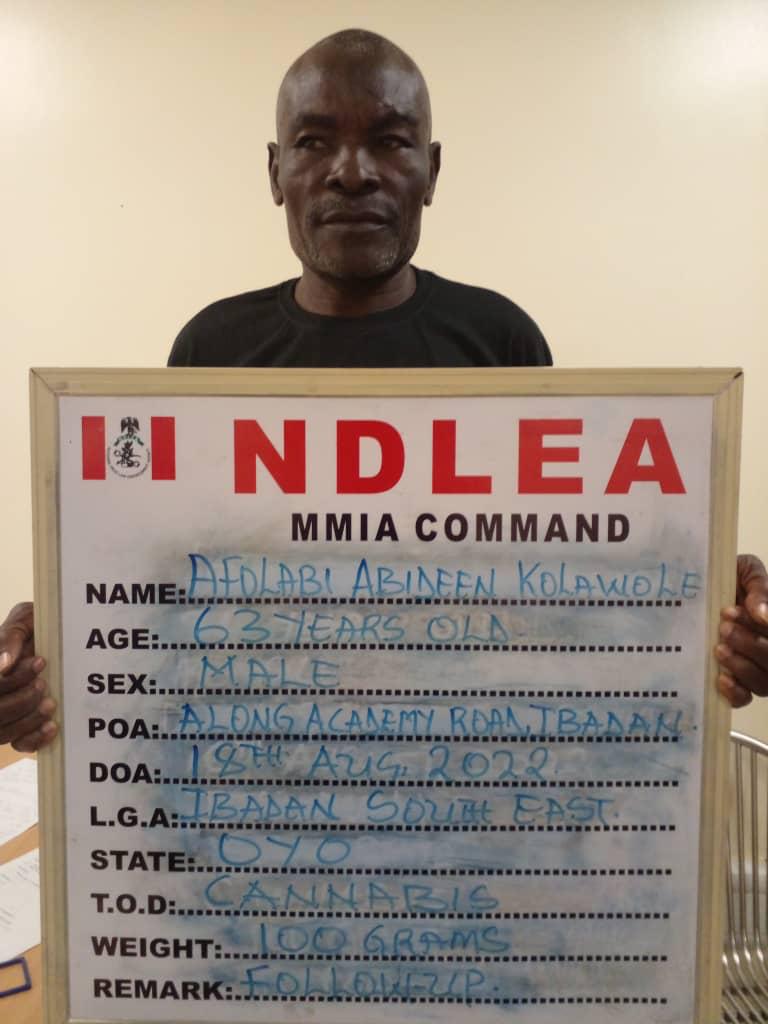 “In Kaduna, a drug dealer Umar Sanusi, was arrested during a follow up operation in Kano and brought back to Kaduna where his consignment of 50 cartons of pregabalin 300mg, containing 750,000 capsules, weighing 375kgs earlier seized along Abuja-Kaduna expressway was counted and weighed in his presence.

“Same day, operatives also intercepted along Abuja-Kaduna express road 7,068 bottles of a new dangerous substance of abuse called Akuskura meant for Kaduna, Zamfara, Gombe, Kano and Borno. The recipients in Kaduna and Zamfara have been arrested during follow up operations.

“In Kogi, no fewer than 696,000 tablets of Tramadol and Exol-5 among others loaded into a truck at Onitsha, Anambra state and heading to Maiduguri, Borno state, were seized along Okene-Abuja expressway, while NDLEA operatives also recovered 300,000 tablets of Diazepam from a suspect, Faruku Bello, 30, in Sokoto State

“Anti-narcotic officers of the Agency in Abuja FCT equally at the weekend intercepted a bus loaded with 323, 200 tablets of Tramadol 225mg and others at Onitsha, Anambra state heading to Nasarawa state. Driver of the vehicle, Osita Nwobodo, 45, who made fruitless bids to compromise the operatives, is now in custody.

“A major importer of Loud variant of cannabis from the United States, Abibu Afis Sola and a 63-year-old grandfather who ships illicit substances to his daughter in Dubai, United Arab Emirates, UAE are among those arrested by NDLEA operatives at the Murtala Muhammed International Airport, MMIA, Ikeja Lagos.

“Abibu was arrested in connection with a 19.30kg Colorado consignment from Los Angeles, USA, which was intercepted on 30th June at the NAHCO cargo import shed of the Lagos airport. While Abibu was still being interviewed in custody, a 37.1kg consignment of Loud intercepted on 7th July was also traced to him. 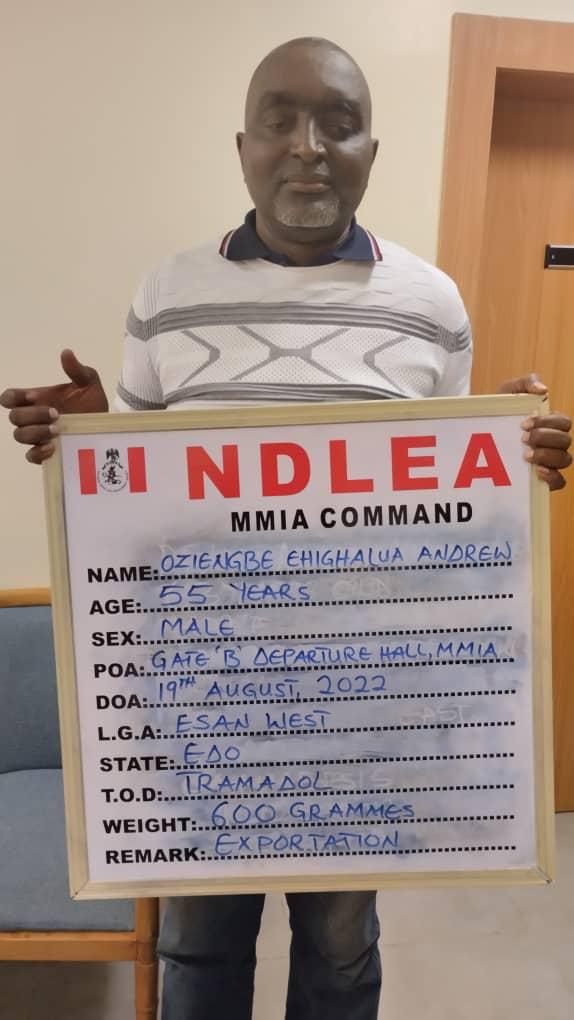 “Also at the Lagos airport, 249,600 tablets of Tramadol 225mg have been recovered from a shipment from India at the SAHCO import shed of the MMIA.

“The consignment that arrived from India via Addis Ababa on Ethiopian Airline flight on 4th Aug was eventually evacuated on Wednesday 17th Aug as an abandoned seizure.

“The 63-year-old grandfather behind an intercepted drug exhibit going to Dubai, Afolabi Abideen Kolawole has been arrested in Ibadan, Oyo state on Thursday 18th Aug after more than four sets of arrests eventually unraveled him.

“He confessed that he was responsible for the concealment and packaging of the cannabis inside the black native soap used as mode of concealment. He also admitted this was his second attempt at sending such illicit substance to his daughter, Barakat, in Dubai.

“In Niger state, 139 bags and 176 compressed blocks of cannabis loaded in Ogere, Ogun state and heading to Zaria, Kaduna states were seized along Abuja-Kaduna road, Suleja from a company vehicle while the driver, Sani Mohammed, 44, and his assistant, Abubakar Abubakar, 30, were arrested.

Raids carried out in Akala, Mushin area of Lagos also led to the arrest of Pelumi Goodness and Ola Funke while over 1,171.75kg cannabis and 29 litres of codeine syrup were recovered.

Chairman/Chief Executive of NDLEA, Brig. Gen. Mohamed Buba Marwa (Retd) commended the officers and men of the MMIA, Kaduna, Kogi, Sokoto, and FCT Commands as well as DOGI for the arrests and seizures. He urged them and their compatriots across the country to intensify their drug supply reduction and drug demand reduction efforts.