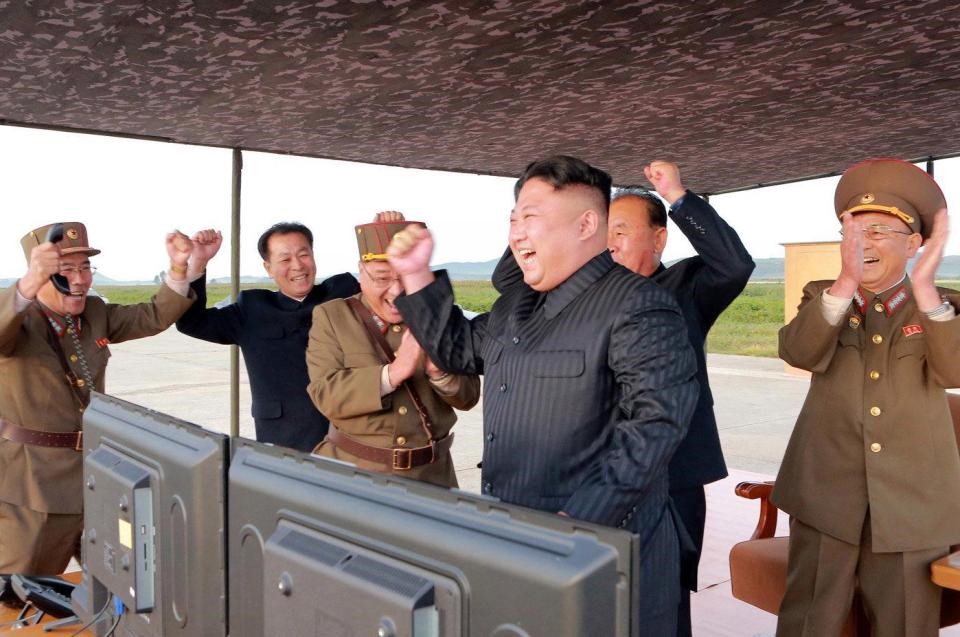 North Korean leader, Kim Jong-un  is always in the news. The young maximum ruler is however not making headlines  because of his ability to find solutions to the many problems and challenges facing humanity, the monstrous leader seems to have a tall ambition, Kim wants to sink the world or put the world under his feet.

Juche the official philosophy of North Korea which preaches self-reliance may not be a bad idea and though the constitution of North Korea formally guarantees protection of human rights, the people live in bondage under an overambitious young man who wants to conquer the world  with his insatiable crave for nuclear warheads.  In 2003, North Korea became the first country ever to withdraw from the Nonproliferation Treaty. It’s  no  longer a party  to the Treaty  on the  Non-Proliferation of Nuclear Weapons.

Kim practically wakes up every morning thinking about no other thing except war and he sleeps dreaming about how to destroy  the world . His preoccupation has been how to develop nuclear weapons and ballistic missiles and probably turn U.S to rubble. Nothing occupies the heart of this erratic leader than how to turn America, the strongest nation  on earth to ashes and also wipe Japan off the face of the earth. Not only that,  the Pyongyang  maximum ruler equally wants to make South Korea  a country that once existed on the world map. This is the level of “madness” of the supreme leader of North Korea.

The North Korean leader sees South Korea and U.S as wanting to overthrow his regime.  To him, military drills in South Korea are merely rehearsals to crumble his regime, little wonder he threatened  to turn the two countries into heaps of ashes. Kim even boasted that the fate of America is in his hands. He also believes that with his military might, he could subdue the strong nation.

The Sun quoted North Korea’s ruling party spokesman as saying “Whatever means and methods the  U.S may employ, they will never work on the DPRK. The U.S fate is in the hands of DPRK. If the U.S and South Korean warmongers persist in reckless action in disregard of our repeated warnings, we will decisively take a strong retaliatory step’’

The man who is the Chairman of the Workers’ Party of Korea (WPK)  and rarely seen in public before taking power is as controversial as his date of birth and seems to enjoy negative publicity. In December 2013, Kim was in the news when he ordered the execution of his uncle, Jang Song-thaek over an alleged  treachery, since then, he has never stopped attracting negative publicity.

Super-rich tyrant  believed to worth US$5 billion is living big at the expense of his countrymen and women who dare not complain for fear of execution or incarceration  by the regime. Many view the Supreme leader as a man who actually love his people, but his extra-ordinary wealth must have punctured that.

Disturbed by series of threats from Kim, the  U.S President, Donald Trump on Tuesday issued a warning that the North Korean leader is on a suicide mission with his threat to hit America and pursuit of nuclear weapons. According to Trump,  if America or its allies are forced to defend themselves, ‘’we will have no choice but to totally destroy North Korea”  While Trump’s remarks at the UN General Assembly of “totally destroying North Korea”  may be  harsh and has been condemned by many, the truth is that something triggered it, the threat by Kim to reduce America to ashes.

The issue is, can the world survive  another major war  in the face of the devastating effects of many crisis across the globe especially when Kim is threatening  to turn America into ashes and Trump responding by saying that North Korea stands to be totally destroyed in case of an attack ? I doubt it.

Nigeria’s President, Muhammadu Buhari may have confirmed my fear in his Address at the 72nd United Nations  General Assembly . Hear him ‘’The most pressing threat to international peace and security today is the accelerated nuclear weapons development programme by North Korea. Since the Cuban missile crisis of 1962, we have never come so close to the threat of nuclear war as we have now”

The clock is ticking against the world, something drastic has to be done and done very quick against the “Rocket Man’’ as Trump called him. Why did I say this? Kim seems to be a drowning man who is right in the middle of the ocean and ready to pull humanity to the bottomless pit and probably make the world to once again go through the agonizing experience of Hiroshima and Nagasaki.