Human trafficking is one of the greatest challenges facing the world today. It directly or indirectly affects every nation on earth. Commonly referred to as modern day slavery, many unsuspecting victims of this crime have lost their lives in the desert and on sea. Little wonder the Federal Government of Nigeria established the National Agency for the Prohibition of Trafficking in Persons (NAPTIP) pursuant to the Trafficking in Persons (Prohibition) Law Enforcement and Administration Act 2003 as re-enacted in 2015 with the mission to stamp out human trafficking and to liberate and uplift the vulnerable especially women and children from dehumanizing and exploitative employment and usage and to ensure their rehabilitation and effective reintegration into society.

The reason why trafficking in persons remains a global challenge is understandable, it is a big business for criminals who indulge in it, therefore, they are not easily persuaded to embrace legitimate businesses. However, NAPTIP since inception has done so much to curtail the activities of human traffickers with the fight even getting tougher under the current Director-General, Dame Julie Okah-Donli who assumed office last year. Julie has given a bite to the war on human trafficking; little wonder the Agency has been getting conviction against offenders who appear bent on soiling the image of Nigeria.

Just on Monday, NAPTIP launched “ ireport App” to fight human traffickers. It is one of the numerous strategies introduced by Julie to put the heat of human traffickers. According to the Director- General, it is meant for people to promptly report issues relating to human trafficking and to further engage the public in the activities of the Agency.

The launch of NAPTP’s ireport App was one of the activities to mark the 2018 World Day against Human Trafficking. The Agency had on Friday, July, 27, 2018 held a Jumat Prayer/sensitization at the National Mosque, Abuja. Two days later, there was a Thanksgiving service at St. Matthew’s Anglican Church, Maitama, Abuja and a Walk against Human Trafficking which took off from Area 10, Abuja.

The Director-General gave an insight into what her Agency is doing not only to checkmate human traffickers but to also give succor to the victims. According to her, every office of NAPTIP has a shelter attached to it where victims of human trafficking are given medical support adding that they are also given psychological support. NAPTP doesn’t stop at that; those who are willing to go to schools are enrolled while those who want to learn trades are equally supported.

Julie who reminded Nigerians that the fight against trafficking in persons should not be left for the Agency and the Federal Government also called for all hands to be on deck to end the menace. 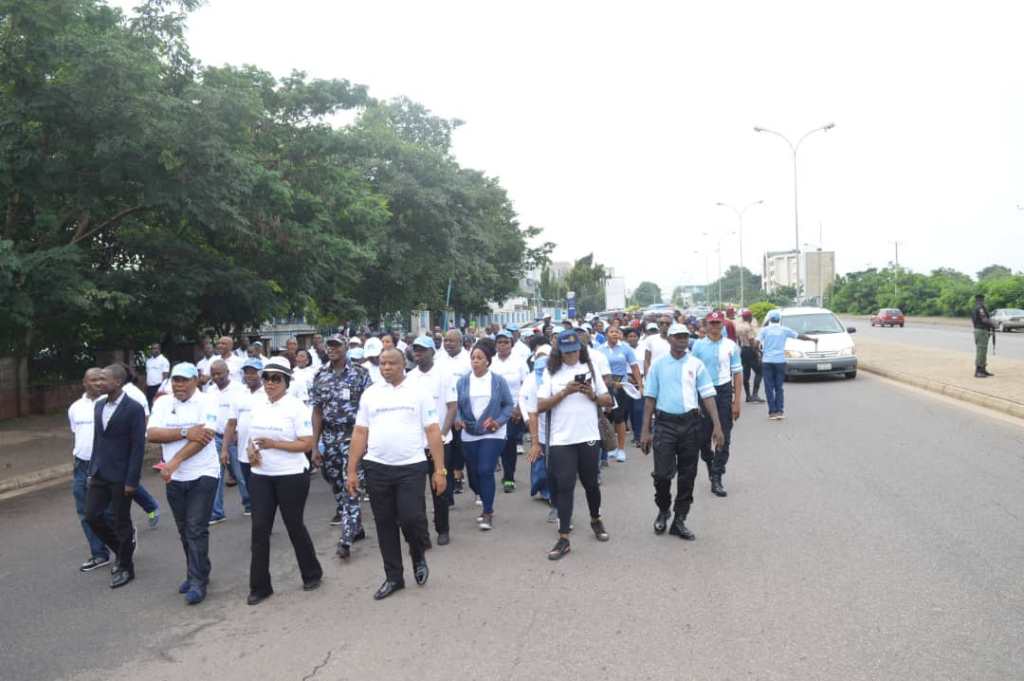 Activities marking the 2018 World Day Against Human Trafficking which ended on Tuesday was also used to mark the 15th anniversary of the creation of NAPTIP, annual Public lecture and the launching of four books two of which were written by Dame Julie Okah-Donli and the other two by officers of the Agency . The activities held at Chelsea Hotel, Abuja witnessed the unveiling of NAPTIP’s new slogan ‘’ Ensuring a human trafficking free nation”.

Speaking at the event, wife of the President, Hajiya Aisha Buhari condemned human trafficking saying it is as a crime against humanity. She emphasized that that the criminal activity is against Nigerian culture. Mrs. Buhari reiterated her commitment to fighting for the rights of women and called on wives of governors to initiate actions that could end human trafficking in their respective states.

Earlier in her address, the Director-General of NAPTIP, Dame Julie Okah-Donli said the launch of four books was an effort to take the fight against human traffickers to the next level adding” the launch of four books will drive a better understanding of the concept of human trafficking at basic and higher levels of education in Nigeria, two of the books were written by my humble self and two other by officers of the Agency”
Julie described human trafficking as an issue that concerns every community because it tears apart social fabrics. According to her,” human trafficking ought to be source of concern for businesses because it distorts markets. I emphasize that this ought to be a source of concern to every nation because it endangers public health, fuels violence and organized crime.”

She speaks further on the gathering “This gathering is to celebrate the numerous achievements of the Nigerian Government in its journey to end the menace of trafficking in persons, garner more support for the efforts at combating the menace through a better understanding of the ills by all and sundry as well as serve as a platform for the review of the efforts with a view to charting a more effective course of action in combating the crime of trafficking in persons”

The Director-General explained that the theme for this year’s celebration “Human Trafficking Boundaries of Uncertainties “is quite instructive because it reminds all stakeholders of Nigerians who lose their lives daily under the scorching sun in the Sahara desert and raging Mediterranean in their strive to cross over to other regions of perceived greener pasture.

She recalled that early this year, the Federal Government commenced massive evacuation of over 2000 Nigerian migrants trapped in Libyan camps in exploitative conditions adding “ the sore testimonies of returnees re-echo the theme of uncertainties surrounding their departure, intensified by the gruesome experiences at detention countries.

Highlighting the achievements of NAPTIP in the last 15 years, Julie said the Agency developed policies towards elimination of human trafficking, embarked on various awareness campaigns to prevent the crime stressing that NAPTIP has rescued and rehabilitated over 13,000 victims of human trafficking while a total of 359 suspected traffickers have been convicted.

The Director-General disclosed further that through partnerships and collaborations, NAPTIP mainstreaming of human trafficking contents into Basic Education curriculum in Nigeria and the establishment of Nigeria/UK Joint Border Taskforce on Human Trafficking were made possible.

In ECOWAS keynote address delivered by Mrs. Florence Iheme, Director , Humanitarian and Social Affairs, ECOWAS Commission, the regional body challenged member States including Nigeria to consider legal prohibition on migrant smuggling in line with the United Nations Protocol on the smuggling of migrants supplementing the UN Trans-national Organised Crime Convention (UNTOC) and applying criminal legislations prohibitions in relation to a standard of care for persons or companies involved in providing travel to migrants.

While reiterating the support of the Commission in the war against human trafficking, ECOWAS said various capacity building initiatives and annual compliance checks with member states through review and reporting system have been useful in ensuring a focused implementation of international obligations in combatting human trafficking.

In his remarks, Richard Yong, Deputy Head of Delegation, European Union Delegation to the Federal Republic of Nigeria and to the Economic Community of West Africa States, said the EU would continue to collaborate with the Federal Government in her fight against trafficking stressing that thousands of Nigerians smuggled and trafficked are in different camps in Libya and have to engage in all manner of things to survive. He also advised government to get its policy on trafficking well and ensure traffickers are always prosecuted.

Other partners and stakeholders in their goodwill messages also commended the Director-General for her commitment and promised continued support for the fight against trafficking.

The Secretary to the Government of the Federation, Mr. Boss Mustapha in his speech described human trafficking as a global crime which requires global fight adding “it is a tough fight, but we have to win it”
Mustapha noted that there are many bad effects of human trafficking adding that the rise in migration in Africa has made human trafficking to thrive.

The Secretary to the Government of the Federation however called on the EU to discourage sex trade in Europe stressing that the rights of immigrants must also be respected. He challenged Nigerians and all stakeholders to support NAPTIP in combatting human trafficking.

Speaking in the same vein, the Attorney General of the Federation and Minister of Justice, Abubakar Malami regretted that human trafficking has become an embarrassment to Nigeria stressing that a situation where Nigerians are stranded in Libya, Burkina Faso, Mali and other countries does not portray Nigeria in good light. He however said Nigeria has come a long way in combating human trafficking. Mustapha challenged ECOWAS to chat a way forward in fighting human trafficking.

The Guest Lecturer, Archbishop Emmanuel Chukwuma commended the Director-General of NAPTIP for her doggedness in the war against human trafficking. The cleric disclosed that every part of the world is affected by the activities of human traffickers. He identified unemployment, hunger, greed, discrimination as some of the factors that make people fall into the traps of traffickers.

The way out according to him is provision of infrastructural facilities and employment opportunities for the youth to make traveling abroad unattractive to them. He also called for increase funding of NAPTIP and the creation of Special Courts to trial human traffickers.

The event also witnessed a documentary on NAPTIP and a drama on the evil of human trafficking and what the Agency is doing to combat it. A symbolic red card was also given to human traffickers by the wife of the President, Aisha Buhari
The 2018 World Day Against Human Trafficking has come and gone, but as stakeholders who attended different events to commemorate the Day have rightly pointed out, all hands must be on deck and every support given to Dame Julie Okah-Donli as she takes the fight against human traffickers to the next level.