Inheritance of a lie

Nobody knows tomorrow. And what was seen as a good solution at a time might be a burden for tomorrow. I write this, which is a true story  for others to understand the consequences. I am not blaming  the person in this story neither anybody who lives the same life style. I only want people to understand what the inheritance out of it was. 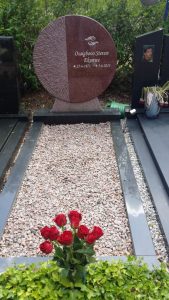 On the 5th of June 2015, my partner who is from Edo State, Nigeria  was killed here in the Netherlands. Not for a bad deal, not an accident, not anything I could make his family understand.  No!!.  A person he shared apartment  with killed him over laundry issue, I mean washing machine.

I would have  but cannot  be more detailed about the incident as the murderer has taken it up to high court. Later more, I promise.

But now I will get to my point.  What was the personal impact for those he left behind? He was a Nigerian, but to get Dutch nationality and security of a stay in this country, he took a lie for good purpose at that time and claimed Sierra Leone as his home country.

Naturally, nobody believed he would die young, nobody could have thought  he would not have the time to rectify his lies. And for sure nobody understood the impact of it.

When he  arrived Europe, he had three beautiful children, two girls and a boy for  three different women .He was a handsome man and lived the jolly jolly life style that time.

He was the first son of still living parents of seven siblings.

I was the only one his friends knew how to find when he died, therefore, I had to take up all the practical burdens of his funeral as he had no family members here, especially Sierra Leone which he claimed.

Because of this ,  I could also not approach Nigerian Embassy in The Hague  for help. Normally ,with an incident like that , the Embassy was supposed to inform his family at home and help with sending the body home.

His lie about his nationality became a practical issue. So I was the one to inform the family and plan the funeral with them. Like  many, he did not plan or insure himself for a thing like that. Because  I did not want him to be buried by the government or cremated as unknown, I gave  him a Christian burial. I gave the last respect.

The change of his name, date of birth, nationality etc. became a burden officially  for Dutch law. We had to take his Sierra Leone identity, and his real name became an alias.

When he became a father , he did not want to put his lie identity on the birth certificate. He thought he had the time to do that later… Sadly, later never came. This became an issue that the children have no name and stand in the court. So they are unknown. They cannot claim anything , likewise his family in Nigeria

In court, they could not claim anything as they are not official registered by the Dutch law to become his next of kin. Painful and a problem, for he was taking care of his parents.

Dear friends, it might not happen to you…You never believe it can happen to you.? But what if something  like this happens to you?  Who has to bear the consequences.? Who will pay the prize? Probably those you love most in life.

Think about this and learn from my story. … It could happen to us all.

In loving memory, rest in perfect peace my dear friend.

Life is really simple, but we insist on making it complicated,

Talk to you next week,