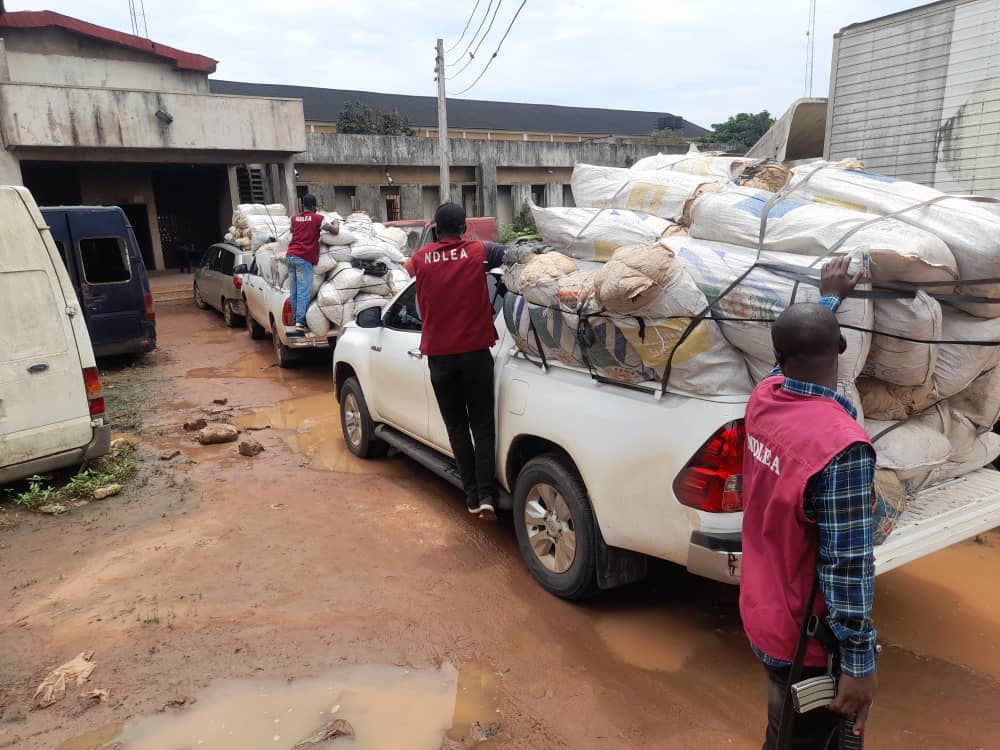 The Biblical verse that God cannot be mocked has manifested itself at a church in Ojodu, Lagos State, when the operatives of the National Drug Law Enforcement Agency, (NDLEA) arrested a major drug dealer wanted for attempting to export 69.65kilograms of cocaine, heroin and cannabis to the United Kingdom through the NAHCO export shed of the Murtala Muhammed International Airport, Lagos.

The NDLEA had last week Sunday traced the wanted drug dealer, Stephen Afam Ikeanyionwu, to a popular Pentecostal church at Mike Ajari Street, Ojodu Berger, where they arrested him soon after he stepped out of the church service.

His arrest followed the interception of a consignment of illicit drugs weighing 69.65kg going to the UK through the Lagos airport on Thursday, 12th August, 2021.

The illegal baggage had been sent to the airport for export through a freight forwarding company, which in turn gave a driver to deliver at the NAHCO export shed.

After the arrest of the driver, follow up operations and investigations later revealed the true identity of the owner of the consignment, Stephen Afam Ikeanyionwu, who was arrested three days later in a sting operation.

Also at the Lagos airport, NDLEA operatives arrested an Italy-bound passenger, Abibu Miminu, during the outward clearance of passengers on Ethiopian Airways flight to Italy via Addis-Ababa for ingesting illicit drugs. While under observation at the Agencys facility between Saturday 14th and Sunday 15th August, 2021, the trafficker excreted 68 wraps of heroin in three excretions, all weighing 800grams.

In the same vein, narcotic officers of the Directorate of Operation and General Investigation have intercepted at two courier companies in Lagos 840 grams of Methamphetamine going to Australia and concealed in bolts; 340 grams of Meth hidden in locally made footwears and also going to Australia; 1kilogram of cocaine coming from Ghana with UK as destination and concealed in four local guitars.

Also seized from one of the courier firms is another 480grams of Meth concealed in footwears and going to Australia.

In a related development, a South Africa returnee, Obi Chigozie Samuel, was also last Sunday arrested at the Lagos airport during the inward clearance of Ethiopian Airlines from Addis-Abbaba, for importing 58grams of skunk into Nigeria. During preliminary interview, he admitted ownership and claimed to be a cannabis smoker.

In strings of operations in Edo, Ondo, Kaduna, Kano and Kogi states, at least 2,504.8 kilograms of diverse illicit drugs were seized from multiple suspects in the past week. In Kogi, 60-year-old Mrs Comfort Uzor was arrested with 62.1kg cannabis on Tuesday, 17th August, 2021 in Lokoja, where one Dayyabu Usman was also caught with 8kg of same substance. While Uzor sourced hers from Bolorunduro in Ondo state and was heading to Abuja, Usman got his from Lagos and was taking it to Kano for sale.

Also in Kaduna state, operatives of the Birnin Gwari Area Command of the Agency raided the home of one Mr Joseph Sunday at Ungwa Pama, Kaduna where they recovered 48.3kg of cannabis from his room following credible intelligence.

In Edo state, NDLEA officers stormed the Ugbuwe forest in Ovia North East LGA, where they seized146 bags of cannabis sativa weighing 2,044 kilograms, while in Kano state, one Ikechukwu Aleke was arrested with 30,000 tablets of Tramadol 225mg and 99 bottles of Codeine syrup, in addition to the arrest of one Muktar Muhammad, with 370 bottles of Codeine cough syrup, weighing 60.4kg, as well as 900 tablets of Rohypnol.

Also arrested in Kano was Sufiyanu Abubakar, 24, with 400 plastic bottles of Codeine cough syrup weighing 52kg as well as one Mutta Hassan Wada, who specializes in using courier firms to send drugs to a recipient in China, using cooking spices bottles for concealment.

In Ondo state, over 77.5kilograms of cannabis and monkey tail were intercepted on Saturday 21st August at Odigbo town in Odigbo LGA, where operatives arrested one Basiru Ijiniga. Also arrested on Saturday was Ibrahim Umaru in Sabo area of Akure South LGA. Recovered from him include different quantities of psychotropic substances like Diazepam, Tramadol, Swinol and Rophynol.

The Director Media & Advocacy  of NDLEA , Femi Babafemi  quoted  the Chairman/Chief Executive of NDLEA, Brig. Gen. Mohamed Buba Marwa (Retd) as  commending  the officers and men of the various commands for their unrelenting commitment to the presidential mandate to clear Nigerian forests and communities of illicit drugs in whatever form.

“We have all laid our hands on the plough, there is no looking back, no retreat or surrender and as such I urge all our officers and men to intensify the ongoing offensive action until the last gram of illicit drug is taken away from merchants of death,”  Said Marwa

A lawmaker and his passion for community development