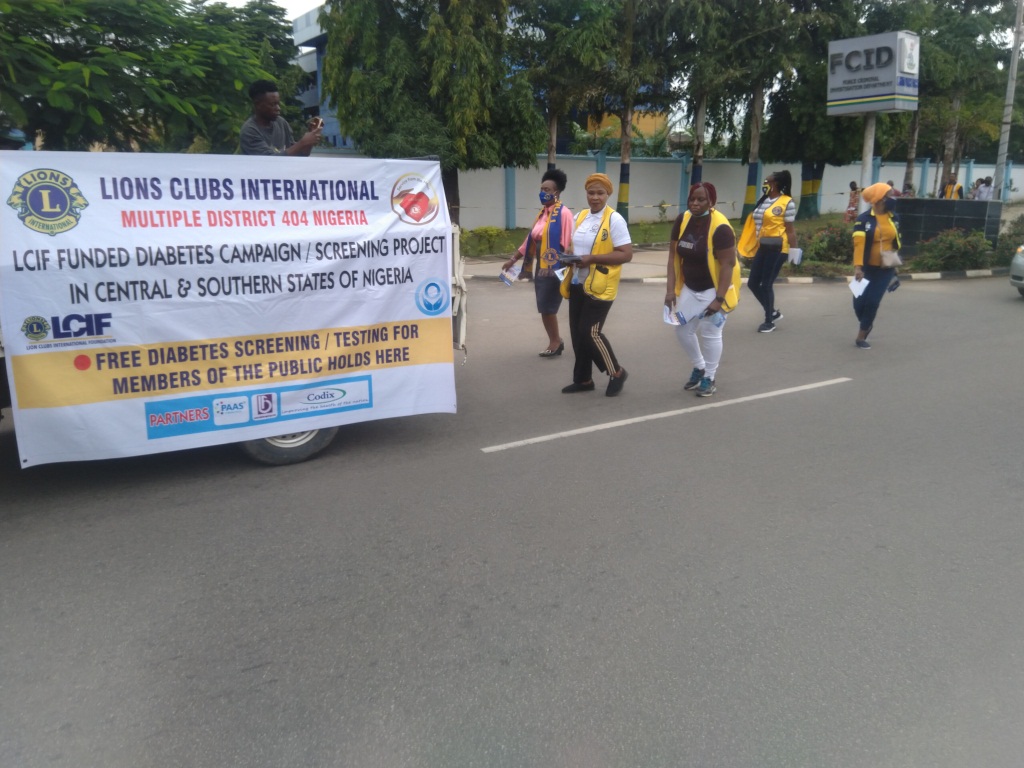 Lions Clubs International has an excellent record of humanitarian works across the globe. This is not coming as a surprise because one of the purposes of the Clubs is to create and foster a spirit of understanding among the people of the world and also to take an active part in the civic, cultural, social, and moral welfare of the community.

During the week, Lions Clubs International Multiple District 404, Nigeria held a sensitization walk and free diabetes screening and test for members of the public. Lions Clubs International embarked on the humanitarian work because diabetes is a disease shared by every segment of the society; the poor, the rich, young and the old. Unfortunately many are not even aware that they have the disease until it’s too late.

In 2018, International President of Lions Clubs, Gudrun Yngvadottir was in Nigeria to unveil an eye hospital in Piwoyi community Abuja, a project of Lions Club Multiple District 404 Nigeria with the support of the headquarters. The colourful event also saw vision screening and diabetes test s for members of the community.

The latest humanitarian work by the Lions Clubs was equally colourful as it partners health personnel to provide free diabetes screening/test to members of the public. This is aside massive sensitization carried out by the association in 11 states, inclusive of Abuja, the Federal Capital Territory.

A past Council Chairperson of Lions Clubs International, Multiple District 404, Nigeria, Lion Lami Onayi Ahmed who spoke with Green Savannah Diplomatic Cable gave an insight into why the association chose to embark on free diabetes screening/test and sensitization programme.

“We are doing this because diabetes is one of the thematic areas of the Lions Clubs. Though the association has other areas that it focuses on, like vision, hunger eradication, cancer, environment and youth; diabetes as you will agree with me is one of the most dangerous diseases all over the world

“It is a disease that kills gradually, that also does not show itself until it is too late and therefore.As an association; we think it is wise for us to sensitize the people. In our attempt to eliminate or eradicate blindness, we know one of the culprits that makes people go blind silently is diabetes and therefore, if we must succeed in our strive for  vision, we must be able to conquer diabetes or raise awareness to such an extent that people can begin to pay more attention to their health “she said

Speaking further at the Flag off ceremony held at the Area 2 PHC (Family Health Clinic) Garki, Abuja, Lion Adediji who is the Grand Administrator traced the history of the project adding that it is to create awareness on diabetes so that those who have it will know on time and could also be counseled on how to manage it.

According to him, it was not the first time Lions Clubs will be embarking on humanitarian work adding that the association has embarked on many projects  in different parts of the country like the on-going Eye Hospital at Piwoyi, building of a Resource Centre for the School for the Blind, Utako, Construction of Diabetes Centre at the University of Lagos Teaching Hospital amongst other projects.

Also speaking at the Flag off Ceremony, the Project Chairperson, Dr.Funke  Adedeji said the project was important because of the low level  of awareness on the danger of diabetes, stressing that many are living with the disease unaware of their status.

She explained that Lions Clubs is bridging the gap because government cannot do everything, adding “we are impacting knowledge on members of the public on the prevention and management of diabetes.’’

Dr. Adedeji disclosed further” we intend to screen 10,000 people per state including Abuja. Lagos and Ogun states have exceeded their target. We intend to educate and follow up on people who have diabetes. To achieve this, we have embarked on community mobilization through sharing of flyers, we have also developed tools; monitoring and evaluation ledger, besides paying advocacy visit to stakeholders in the health sector.”

The Minister of Health, Dr.Osagie Ehanire represented by Dr.Nnenna Orji commended Lions Clubs for embarking on the project adding that the Federal Government is committed to addressing health challenges of Nigerians.

Some of the beneficiaries who spoke with Green Savannah Diplomatic Cable also commended Lions Clubs International Multiple District 404, Nigeria for the project,