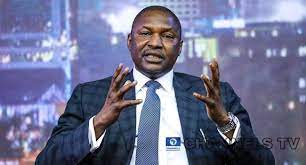 The Attorney General of the Federation AGF and Minister of Justice, Mr. Abubakar Malami, SAN has been petitioned by his immediate predecessor, Mr. Mohammed Bello Adoke, complaining against his malicious link with the corruption case the Federal  Government instituted against JP Morgan Chase N.A

Adoke, a Senior Advocate of Nigeria (SAN) in the petition asked his successor to set the record straight and wash him clean by deleting his name from any wrong doings in the transactions that led to the legal action against JP Morgan.

In a petition written by his lawyer, Mr, Paul Erekoro ,SAN, Adoke among others noted that the federal government’s argument that he  contacted JP Morgan repeatedly and sent an email using the mail of Aliyu Abubakar’s shell company, was false.

The former AGF noted that allowing unverified information to be presented before a foreign court to the effect that he and  a former Minister of Petroleum, Dan Etete committed the offence of “money laundering by facilitating the payment of the funds to Etete and Malabu Oil & Gas Limited through the Deposit Account,” remained baseless.

The former Nigerian law officer lamented that Malami allowed those instructions to be given, or allowed those “facts” to be presented in a court of law, when he was fully aware that they were not true.

The senior lawyer reminded Malami that he (Malami) had written the Economic and Financial Crimes Commission (EFCC), indicating that “evidence does not appear to have clearly revealed the case of fraud against the parties in view of their claimed acting in their official capacities.”

“In your letter to the President of the Federal Republic of Nigeria dated 15th September 15, 2017, you had also advised the President that:…EFCC investigation does not appear to have clearly revealed the case of fraud against the parties who claimed to have acted in their official capacities with the approval of three consecutive presidents at the time,” he said.

He recalled that even Dr. Ibe Kachikwu, the then Minister of State for Petroleum Resources had also appraised the resolution agreements and in his letter to the  chief of staff alerted to the potential negative view of Nigeria that may follow should international arbitration ensue from the matter.

Relying on Malami’s legal advice, Adoke stated that the former petroleum minister also came to the reasoned conclusion that it was in the national interest to allow all the contending issues to be laid to rest so that Block 245 could be operated for the benefit of the government.

He further quoted the Federal High Court in its judgment dated 07/04/2018, delivered by Justice B.F.M Nyako, which said that the involvement of the plaintiff in the negotiations leading to the implementation of a settlement agreement was in furtherance of the lawful directives of the president.

“The plaintiff cannot be held personally liable for carrying out the lawful /approvals of the president while he served as a minister of the government of the federation,” Adoke quoted the court as saying.

He explained that the government did not appeal that judgment, the legal implication being that the judgment represented the truth of the matters that it decided, for all time.

“Unfortunately, and contrary to your own legal advice and in defiance of the un-appealed, binding declarations made by the Federal High Court, your office filed charges in another court of coordinate jurisdiction against the parties to the settlement agreements, with our client as one of the defendants.

“You are also aware that even though at the High Court of the Federal Capital Territory, Abuja, you had charged our client with receiving gratification in the sum of N300 million from Mr. Aliyu Abubakar on account of OPL 245, your witnesses, including the EFCC investigator, later admitted in sister proceedings at the Federal High Court that the said N300 million was not gratification from the Malabu transactions.

“But that it was the refund of a loan taken by our client from Unity Bank to purchase a house from Mr. Abubakar, with the title documents to the property deposited as an equitable mortgage for the loan,” the former minister added.

From what is now reported of the proceedings in England, Adoke noted that he had reasonable grounds to believe that Malami’s office deliberately amended the charge of forgery against one Mr. Suraju in order to keep alive the fiction being passed off as truth to the English court.

“It is disheartening that the good name of our country is being associated with such unethical methods in a misguided view of ‘national interest’. It appears that the office of the Attorney General has embraced the discredited doctrines of ‘the end justifies the means’ and ‘all is fair in war’. To say the least, this is most regrettable,” he stated.

According to him, those who signed the instructions that enabled the payment to Malabu Oil and Gas Limited pursuant to the OPL 245 Resolution Agreement of 2011, are walking freely without any insinuation that they were involved in any fraud or scam.

The letter added: “Our client is addressing this protest to you because it is not possible for you to be unaware that lies are being told about him in court proceedings filed by the Federal Government of Nigeria in the Commercial Court in the United Kingdom and the fact that grave injustice will be done to him if urgent steps are not taken by your office to properly inform and guide the English Court on the facts needed to assist the court to arrive at a just determination of the suit.

“The Attorney General is further reminded that as an Officer in the Temple of Justice he is required to, at all times, place the true facts before the court. This is irrespective of the interest at play.

“The Attorney General therefore has a duty in the present case to bring to the attention of the court, all exculpating circumstances which in this case, include,” he noted

The letter was copied to the court manager of the Business and Property Court, Commercial List, and Nigeria’s solicitors — Freshfields Bruckhaus Deringer LLP, and Andrew Mitchell.

Young Africans should be shapers of decisions - Thokozile

Demystifying the worth of Intellectual Property Rights