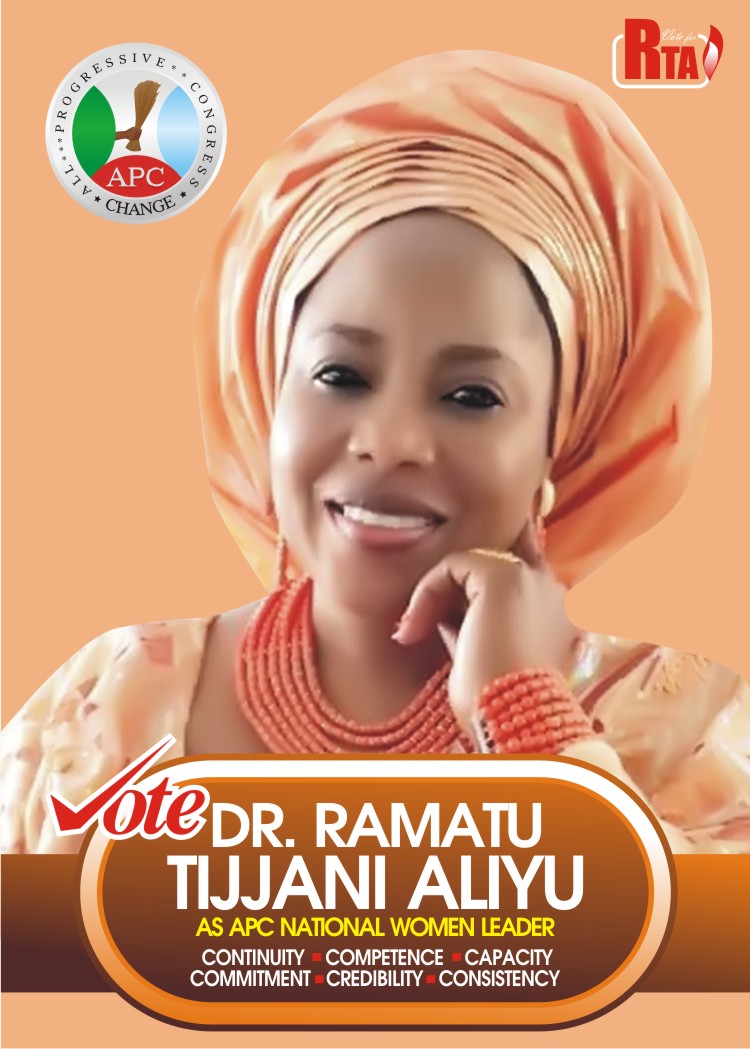 The National Women Leader of Nigeria’s ruling party, All Progressives Congress (APC) Dr. Ramatu Tijani Aliyu has described as false a report in a Nigerian Newspaper and some blogs that she was no more interested in her seat as APC holds her National Convention today in Abuja.

In a two separate Press   Statements personally signed by the politician and made available to Green Savannah Diplomatic Cable, Dr. Ramatu said she is very much in the race and also described as false a news going round that she received Three Hundred Million Naira for women mobilization during the 2015 Presidential Election. 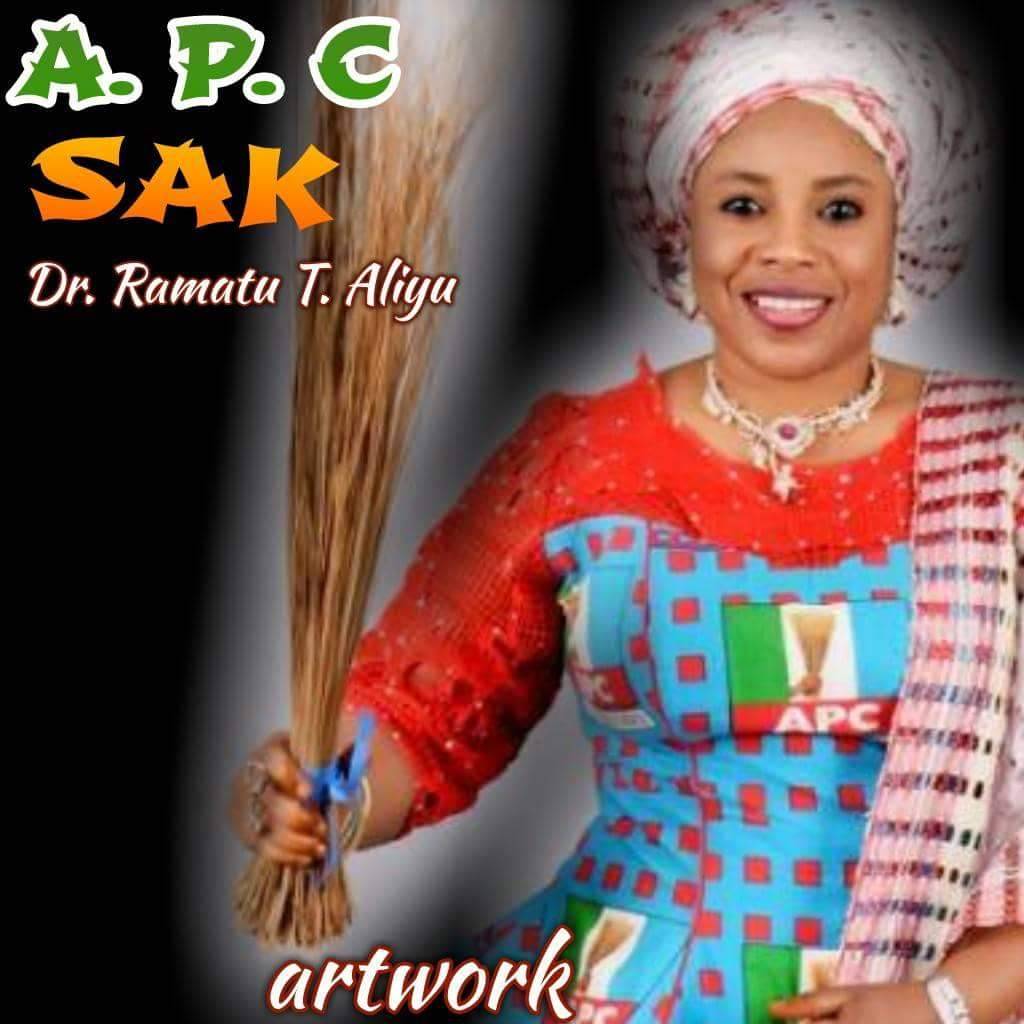 She said ”I  have received with shock and displeasure a false news  that I  Dr. Ramatu Tijjani Aliyu the incumbent National women leader of the APC and a widely endorsed candidate for the National Women leadership of our great party in Today’s Convention has withdrawn from the race.

“This development is not just unfortunate but a crude demonstration of the garage politics and dirty propaganda being deployed by my opponent and her sponsors in an attempt to deceive our delegates. To think that someone seeking to become a National Women leader of our great party the APC can descend so low is not only bad for the APC but also dangerous for our nascent democracy.

“I hereby clearly and unequivocally reassert that I Dr. Ramatu Tijjani Aliyu is still firmly in the running to retain my office as the National Women leader of the APC and to build on the good work we have started together. I therefore urge our delegates and party faithful to disregard and ignore any such news and plots to deceive you into voting for the wrong candidate.”

On the allegation that she received  Three Hundred Million Naira to mobilise women in the 2015 Presidential Election, read the full text of her press statement bellow:

My attention has been drawn to a new campaign of calumny by forces conspiring against my re-election into the office of the National Women Leader of the APC. The latest attempt to smear my hard earned reputation in order to discredit me in the eyes of the APC faithfuls and its Leaders has just been unleashed in the shape of a spurious allegation of ‘financial misappropriation of APC campaign funds’ to the tune of a whopping three hundred million Naira (₦300,000,000.00).

I have reliably gathered from an insider that having tried every trick in the book to pull me down in the forthcoming National convention of the APC without success, they have resorted to a crude distortion of history to achieve their sinister agenda. They have now curiously alleged that I, Dr. Ramatu embezzled the sum of ₦300,000,000.00 meant for women mobilization during the last APC Presidential campaign. And that I have nothing to show for it in terms of mobilization and outreach programmes.

As ridiculous and unfortunate as this latest plot is, I am inclined to put the records straight and preserve my special seat in the annals of APC history. To this end I categorically state that I, Dr. Ramatu has aver and verily state that during the campaigns, I neither directly nor indirectly received the sum of ₦300,000,000.00 or any such sums for the purpose of women mobilization for the 2015 Presidential election of the APC or any other elections for that matter. This bogus half-truths only live in the imagination of my detractors.

The point must be made abundantly clear that I, Dr. Ramatu only received the sum of ten million Naira (₦10,000,000.00) from our father and leader Asiwaju Bola Ahmed Tinubu for women mobilization; the same amount I graciously handed out to the Youth as well as the physically challenged wings of our great party the APC. It is equally noteworthy to reemphasize that the said ₦10,000,000.00 was judiciously and appropriately expended on vital components of our women mobilization drive in the lead up to the 2015 general elections, and the records are there for anyone who cares to know. Nonetheless, I will still go ahead to furnish interested parties with some details of our mobilization drive that has more than justified the ₦10,000,000.00 graciously given by our leader the Asiwaju.

It is on record that in the course of the women mobilization efforts in the lead up to the 2015 general elections:

The point must be made that the publicity and logistics components of the women mobilization campaign alone exceeds the ₦10,000,000.00 referenced above. Indeed what is apparent from the foregoing is that I had gone above and beyond the available resources to expend my personal resources in the mobilization of women and even youths in my quest to ensure maximum support for President Buhari.

And in case anybody is wondering why one who doesn’t earn any salary will expend her personal hard earned resources on the campaign of Mr. President, wonder no more, it is an open secret within the APC family that President Muhammadu Buhari is not only a father but also a mentor to me, Dr. Ramatu Tijjani Aliyu whom he has taken under his wings from the very inception of my political career. My loyalty to PMB knows no bound and will therefore spare no expense to ensure his success. Unlike my detractors, I will not play to the gallery just to invoke the favour of Mr. President because am not a fair weather politician.

I therefore urge the peddlers of this  unsavory and baseless allegations to retrace their steps and engage me on issue based politics and campaign because that is the only strategy that will appeal to me.