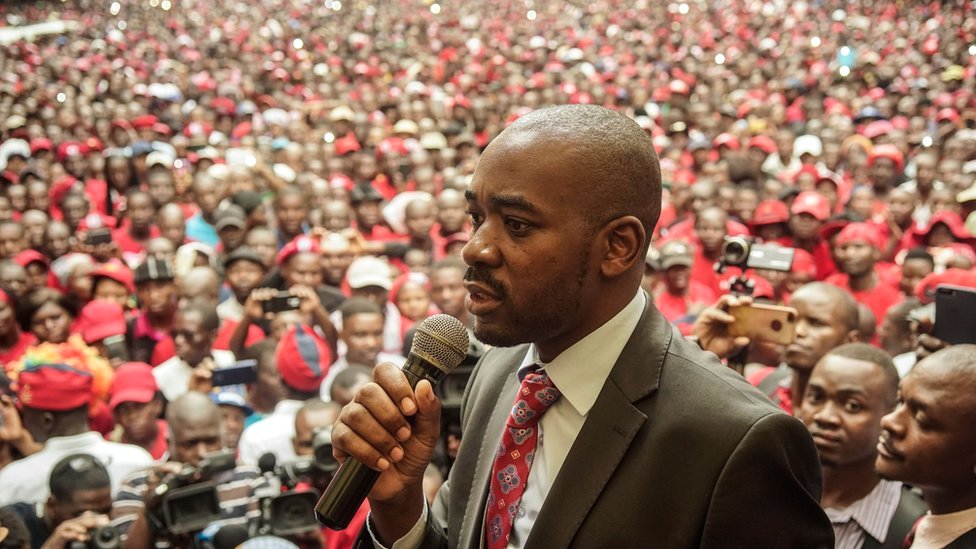 The President of MDC Alliance, Zimbabwe, Nelson Chamisa has called for true unity and respect for the rights of all citizens of his country even as the opposition leader laments that hundreds of leaders of his party have been detained by the government unjustly.

In his Unity Day message to the country, a copy of which he made available to Green Savannah Diplomatic Cable, Chamisa says Zimbabweans should be free stressing that no meaningful development can take place in an atmosphere of violence, oppression and disunity.

His words: “The consistent and persistent denial of citizens’ rights is a form of violence against political opponents; genuine unity does not produce an impoverished society. It exalts a people to prosperity”

The bold font of divisions, destruction, violence and anarchy continues to override the voices of love, unity, peace, reason and development in our country.This is largely because our nation-building project has not fulfilled the promise of the glorious days of independence. We need true unity, peace and prayer to heal and build our nation. Peace and unity are the necessary ingredients for development and the enjoyment of fundamental freedoms and rights.

However, it is important to understand the idea of unity. Unity is not about the coming together of bodies, commanded by the powerful in society. It is not an event signified by elite political pacts. Unity is a process by which minds are drawn together organically to achieve a common purpose.

Unity does not mean the absence of difference. Instead, it is a process that acknowledges, recognises and celebrates difference as a natural part of a normal society. Therefore, unity does not necessarily mean uniformity among peoples. Rather it recognises and promotes diversity and the beauty of it.

Indeed, unity does not mean compulsory conformity of the minority to the majority merely because the majority demands compliance; rather, unity behoves the majority to recognise and respect minorities in whatever form because they matter too. Politically, unity is a process in which parties of different political and ideological persuasions are allowed to pursue their cause while they come together to face common threats.

Unity does not criminalize diversity and alternative views. It is not tyranny of the centre. This why the devolution process, which is encapsulated in our constitution is essential for unity. Unity does not mean sweeping pain and tears of a people under the proverbial carpet. Rather, it is a process that is undergirded by truth-telling, acknowdgement of pain, remorse and reconciliation.

Where there is unity of purpose there is difference but a commitment to development and prosperity. Genuine unity does not produce an impoverished society. It exalts a people to prosperity. On this day, we should be celebrating. But too many of our people are in great pain because of socio-economic burdens that have become unbearable. Currently, we experience too many divisions, violence, and hatred. This has made Unity Day become trite, vacuous and meaningless without the values and practices of unity that I have outlined. It has become a reminder of the ogre of violence, intolerance and hate speech that continue to engulf our nation.

Violence is intolerable. We note with disdain an increase in abductions and torture against its citizens including young leaders and activists. We have hundreds of MDC leaders in detention or on remand facing trumped-up politically-motivated charges. The consistent and persistent denial of citizens’ rights is a form of violence against political opponents.

The harassment, intimidation, illegal arrest of opposition leaders, activists, and professionals is repugnant to unity and peace. It’s deplorable how professionals have been harassed and persecuted during the course of the year simply because they have dared to exercise their freedoms. Unity does not mean a suppression of fundamental rights and freedoms. It celebrates and protects them.Unity is not built on force. It is built upon foundations of love, understanding and appreciation of difference and diversity.

In a New Zimbabwe, under our new government, we propose a National Unity, Peace and Prayer Day. We do so in recognition of the fact that unity, peace and prayer are interconnected .We recognise that unity is not merely a political slogan but rather, it is a reality that we must experience in all spheres, be it in our families, churches, workplaces civic organisations or government.

Nation building is an ongoing project that must produce conditions of unity in diversity. But we cannot build a nation when there is persecution. We call for an end to political persecution. Nation building requires justice to be done for the aggrieved in our communities.

We deserve to be united by our values, aspirations, constitution and human rights. No single organization is bigger than Zimbabwe. We must imagine a better, just and more prosperous Zimbabwe in which our diversity is celebrated, not condemned.

We owe it to ourselves and future generations as God’s people to embrace one another in unity, to pray for the prosperity of our nation. Prayer works with works. We should not wait for divine intervention when we can change our behaviour.

This day, I call upon families and all people of this country to embrace this day as a day we express our unity with one another. A day we find peace. A day we seek the Lord as we prepare for Christmas and the New Year holidays.

This day, I join you all in demanding true unity, peace and prosperity for us all as a people. We in the MDC are ready to play our part in finding a lasting solution to the national issues that bring us together as a nation. We will unite the nation and bring peace in the name of our Lord, without resorting to any forms violence which we abhor.

In this our fractured nation, I wish you all a blessed Unity, Peace and Prayer day and we pray for unity and peace in our country.

For justice, peace, a shared vision, true unity and the cause of freedom,