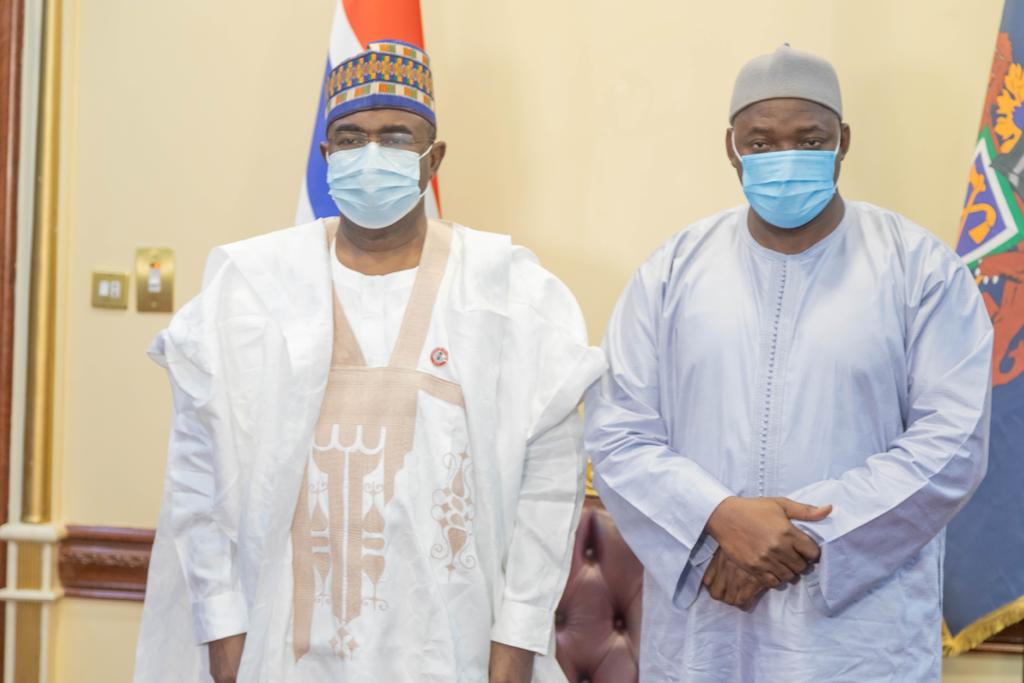 Gambian President Adama Barrow has called for more collaboration among anti-drug law enforcement agencies in Africa and the world at large. Besides, he commended Nigeria’s commitment to the war against illicit drug trafficking and abuse.

The Gambian leader gave the commendation at the State House, Banjul when he received Chairman/Chief Executive of the National Drug Law Enforcement Agency, NDLEA, Brig. Gen. Mohamed Buba Marwa (Retd) who was in the country to sign a Memorandum of Understanding (MoU) with the Drug Law Enforcement Agency of the Gambia, DLEAG, which borders on cooperation in combating illicit production, manufacture, and trafficking in narcotic drugs, psychotropic substances and their precursors.

President Barrow at the courtesy call applauded the decision by the NDLEA to sign the agreement with DLEAG, saying such will strengthen and integrate ECOWAS member states especially in the area of war against drug trafficking and abuse

In his words: Drug cartels work as a network are linked as such, institutions fighting them must also partner and work together. The whole of Gambia has an important guest in Gen. Marwa who we have heard so much about his leadership traits.

“Nigeria has been helpful and supportive of the Gambia in various forms and we are grateful. The signing of this MoU between NDLEA and DLEAG is a clear indication that Nigeria is more than willing to partner with us. His coming to Gambia is an indication of Marwa’s personal commitment to the war against drugs and I believe the agreement will benefit both countries because drug use is a national threat and big security issue, and without security no nation can progress.”

In his remarks, Gen. Marwa expressed happiness that Gambia is a willing partner in the fight against drug cartels in the West African sub-region.

“We are facing enemies of the worst grade and so we need all the support and partnerships at the national, regional and international levels”, he stated.

According to a press statement made available to Green Savannah Diplomatic Cable by the Director Media and Advocacy of NDLEA, Femi Babafemi the NDLEA Chairman was accompanied on the visit by Nigeria’s High Commissioner to Gambia, Muhammed Manu and other top officials of the Agency.

Again, Nigeria has been humiliated